This year for our Study Trip we visited Amsterdam. Holders of the Martin Howe Bursary have written a report about our visit.

Hello! I’m Laura, and I am a volunteer at the Museum of Oxford. I hadn’t previously been to Amsterdam and wasn’t sure what to expect in terms of the culture and how different museums addressed different cultural and historical issues. Now, I feel there is a lot to be learnt from the city and its museums, which can be applied to museum practice, but also cultural thinking. 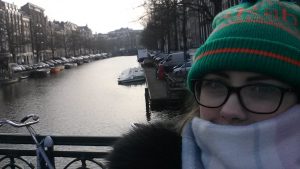 The Jewish Historical Children’s Museum really made me reconsider how museum spaces can be used for physical learning activities. With a space to bake different kinds of Jewish bread, a room to create music, and a study room, the space was bright, colourful and inviting, with a sense that visitors (not just children, but adults too!) were welcome to activity take part in discovering the stories of Jewish history and culture.

The talking wall at the Jewish Children’s Museum referenced the Jews leaving the area (in the time of the Second World War), but did not display any direct reference to this time in history. It created a safe space to ask questions and reflect on what happened, rather than using the atrocities as the focal point to the museum.

The next day I queued to visit Anne Frank’s house. Through the wish of her father, the house is open to the public, telling the story of their hiding, and those that made it possible. The display was done in a very respectful manner, yet there are no words to easily describe how visiting this space made me feel. You learn through the immersive nature of the space, a sense of place which can only be felt.

The same day we visited the Amsterdam Museum. They also have a children’s learning space, integrating historical and cultural objects with areas for activities and discussion. It was interesting to see that they had raised a work of fine art high above the hands of children, but (after much discussion) still allowed it to be visible in the space. There was a display of faces of Amsterdam’s population from around the globe, showing the proud diversity of the city. As I walked through the rest of the museum, I spotted the ‘DNA’ display, capturing how Amsterdam’s DNA is made of Civic Virtue, Spirit of Enterprise, Creativity, and Freedom of Thought. The four different areas were translated into many languages below, but I don’t think this was for visitor translation purposes alone, but rather to reflect the citizen of the world atmosphere created by the museum, and by extension, the city itself.

All of the spaces told different stories, enabling visitors to learn and discover in different ways, and I think this variety, done in such a creative and purposeful manner, is something we can all learn from.

Hi, I’m Fi Exhibitions Coordinator at the Norwich Castle Museum. The trip began with a foggy take-off but efficient arrival in the city; dump the bags and all of a sudden it’s what to do first with all this precious free time (anyone who’s ever left small children at home will understand)! So a fresh mint tea (first of many) and then Rembrandt’s House Museum – an insightful and immersive experience, aided decisively by locating all facilities in the house next door. 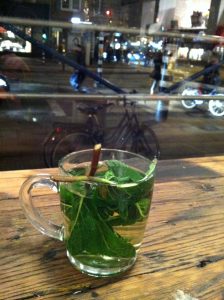 The first formal visit to the Maritime Museum set the bar high; we heard about their full re-display process, showing what serious upfront research and successful fundraising can achieve when governed by clear thinking. Mostly, I took away a masterclass in audience identification, with planning from the outset focusing on who would want to see what, and consciously matching object saturation, theatrical presentation and interpretive strategy to the different audiences gallery by gallery. Another strategic decision to have no temporary exhibition space, instead using funds to refresh/repopulate one permanent gallery space each year in rotation, continues to give me pause for thought. So in all, a surprise favourite I’m already raving about to parents taking children to the city.

The Amsterdam museum also held interesting audience perspectives, with its temporary exhibition programme and ‘City Lab’ Learning space focused firmly on the local audience – another pause for thought in how return visits were being created from first-time visitors drawn in by their recent football exhibition. The Jewish Historical Museum’s Children’s Museum seemed another achingly successful exercise in audience identification, aiming to immerse children in a world of Jewish life entirely beyond reference to the holocaust.

The Rijksmuseum was a very different visit with no behind the scenes insight but probably just as well, given how much there was to take in front of house. Our guide helped us understand their infamous ten year redevelopment, and the gravity of the decisions made on exactly how to reinstate the original V&A‑esque (but oh so Catholic…) architect’s creation. After the tour however, it was soon clear how international tourist volume was a key parameter, and interpretation was frustratingly traditional. In the end I gave up on the gallery map, ignored the clunky chronological ordering and just wandered, hoping I’d know the highlights when I found them (and I found a few!). As twilight fell through the magnificent glass roof I rested my feet with yet another fresh mint tea and decided I had definitely been won over.

I also took in the soaring spaces of the Portuguese synagogue and the 14th century Oude Kerk (with extraordinary contemporary art installations), both arrestingly beautiful. And still there was more time to eat, read and socialise, and in the cold clear weather  tram-hop and walk miles taking in the independent shops and cafes that line canal after canal. Overall a singular trip – generating so much to think about and enjoy, both professionally and personally; thank you SEMFed.

Hallo! Joe here. I’m relatively new to the SEMFED, and I’m the Business Support Officer for Ipswich Museums. I’ve finally got myself back into the ‘work rhythm’ after a great few days in Amsterdam as part of the SEMFED European Study Trip. There were so many highlights for me, so to choose one is going to be difficult. The one I think that really impressed me was the National Maritime Museum. For those of you that aren’t aware, the National Maritime Museum, or Hetscheepvaartmuseum Museum (10/10 for effort on translation), is a semi-privatised museum that tells the story of 500 years of Dutch naval history and how it shaped the Netherlands. Now I confess, I wasn’t expecting much from this museum. Firstly, my knowledge of maritime history isn’t great, and I didn’t know if this would really stimulate me at all. I’m glad to report, however, that my preconceived ideas turned out to be wrong.

The Museum building is the old naval depot and arsenal of the Dutch Admiralty. The site underwent a major refurbishment, and this helped to improve the building’s climate control and design of exhibition galleries. The curators themselves admitted that in the past some of their exhibitions wouldn’t be engaging to all audiences, only really maritime enthusiasts. The upgrades that they’ve made from the refurbishment are exactly what I look for in a modern museum. Specifically, I think the technology they have employed is fantastic. Each gallery has their own interactives, each designed to give the individual space its own feel. These interactives included going on your own sea voyage adventure through time, going inside a ‘whale’ while learning about Amsterdam’s past whaling industry, seeing how navigation tools worked while at sea and my favourite, going aboard the replica ship ‘The East Indiaman’.

It’s worth noting that the architecture of the building is amazing, specifically the glass ceiling that was designed in a competition. Its design is of a sea chart, which I saw in one of the galleries. I’m not surprised it was the winner!

There are things to do in all parts of the museum, a little something for all audiences, which I loved. While I’m at it, I’d love to give a quick shoutout to Dutch cuisine. Specifically, the cheese and gin. If you haven’t tried either, the city is worth a visit for that alone. I will definitely be coming back in the future. Thanks to the Martin Howe Bursary, I was able to come along on this trip. I’m very grateful for the opportunity, and look forward to many more trips in the future!

Hello, I’m Abbie and I am the Learning and Events Officer at the Natural History Museum at Tring. I was recommended to attend the trip by the Head of the Museum and I am really glad he did. It was a great experience not only visiting a vast array of Museums but meeting other professionals in the sector too.

I had previously visited Amsterdam in Middle School and mainly remember the canals and walking around the bustling streets – watching out for bicycles of course. I was eager to return as an adult and experience the city in a completely different way. Upon walking around the city I was struck by the vast amount of museums and galleries present on nearly every street. The importance and value that the city places on its museums and galleries was even more evident upon visiting them. All of the Museums (5 within the trip plus 1 independently) that I visited were maintained to a pristine standard, were contemporary and all had new galleries, exhibitions or complete refurbishments. They were all very progressive which I was extremely impressed by.

I was particularly captivated by the Lates event at the Van Gogh Museum. We were lucky that the monthly Friday night lates happened to fall whilst we were in the city. We attended as general visitors to this event and had a good few hours to look around. Initially walking into the museum you felt that it was a completely different feel to general opening hours and it felt special to be there. They had mood lighting, modern illustrations projected onto the walls, a cocktail bar, a DJ playing on the stage, trendy illustrations of Van Gogh and even a few impersonators. The event was very ‘cool’ and this was reflected in the crowd which it attracted. 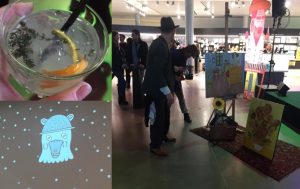 The majority of the visitors were 20–35 year olds socialising over a drink. I wondered whether they saw the museum as just a place to gather before they headed out on their Friday night but the popularity of the galleries suggests not. The galleries were busy, visitors were taking time to read the interpretation, look closely at the displays and have conversations. The addition of a drawing competition engaged the visitors further and encouraged them to analyse closely one of Van Gogh’s paintings or be inspired by his artwork – which is what I imagine the museums aims are. The event culminated in a performance by a rap group (with swear words and all) which I was very surprised and impressed by.

The museum took the bull by the horns and committed fully to the event. This made it feel authentic, it didn’t feel as though the museum was trying to pull something off or was just putting on an event just to attract a different audience. This resonated with me as we are currently reviewing with our adult offer. The trip in all has made me think about our public offer and contemplate whether we should stick to what our ‘feel’ of the Museum is or whether we should try a few new avenues. I have arranged a review of our public offer and where we will be challenging ourselves to really identify who we are.