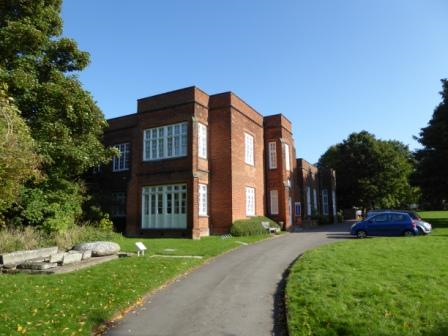 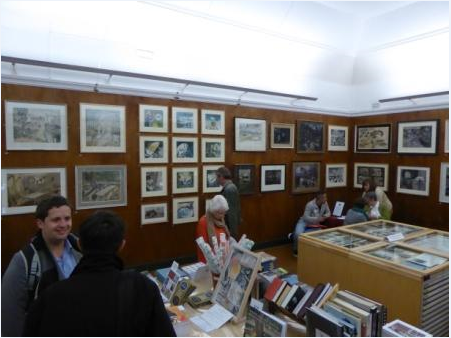 This event was held jointly with the Eastern Region’s AMA support network, and so there were a few non-members there who I hadn’t met before which was great. We all spent the first section of the day together, and then later on we split so that the AMA group could have their meeting.

After our initial tea and catch up with people, Carolyn Wingfield, the Curator of Saffron Walden Museum welcomed us and gave us an introduction to the museum and its collections: Saffron Walden Museum is the District museum for Uttlesford. It serves the largest area of Essex, both rural and small town communities which are being diversified by new settlements for commuters. Carolyn went on to give us an overview of local history and the development of the town.

The Museum’s mission is to give people inspiration and a sense of place. The Museum is now run by the local council, but the buildings and collections are owned by a charity, the Saffron Walden Museum Society. This enables some different ways of working, for example the museum’s new website is independent from Local authority control since launch it has seen internet usage rocket.

The whole site including the grounds is a scheduled Ancient Monument. The purpose built Museum building is grade 2 listed. The museum has 6fte posts and 60 volunteer mainly working in the stores or reception. This equates to 40,000 hours in volunteer time! Two main strengths of the collection are Ethnography and Decorative arts.

The museum team are currently working on a two stage HLF bid to support their next major challenge : the rebuilding of the education and function rooms and a complete redisplay. This will need to encompass a review of the very diverse collections, some of which now fall outside current collections policy.

But in the meantime, they are moving stores! The currently store is very prone to flooding, and it has been a 10 year project to get permissions and funding all lined up for a new offsite store. After a year of wrapping objects with a large team of dedicated volunteers they start to move into the store in mid October.

Next, Leah Mellors (Collections Officer) took us through two current projects the new store build and move and current community exhibition ‘Uttlesford; A Community of Collectors’ and its production.

The new store is purpose built, on two floors and is designed to replace a long term temporary store which flooded badly. It has separate rooms for archaeology and metal work a Study area cleaning room staffroom and kitchen the project was managed by Cocksedge and bespoke racking and shelving was made by Link 51. It includes roller racking, heavy duty racking, plan chests and tapestry racking . The 1500 shelves are now all hand labelled, by Leah! The object packing was carried out largely by 20 volunteers who worked with Leah to complete this mammoth task. It included renumbering, some cleaning and producing contents lists if there were none before. The repack has allowed the development of Hazard warning labels so those working with boxes know in advance the boxes contain glass, asbestos ‚sharp edges etc.

It has taken 7 months so far to wrap and pack up the old Newport store; 420 boxes plus 464 unboxed items and in total more than 3000 objects packed for the move. The volunteer team brought a diverse range of skills to the project and contributed 1200 hrs of time. The project could not have happened with out the volunteers and the museum is of course very grateful to them.

As part of the move the museum also had two interns in post: Dorien –Archaeology and Rationalisation and Nicola – Social History. This has allowed the development of the Object of the Month programme which is possible as staff and volunteers get to know the collection in detail.

Uttlesford; A Community of Collectors: This is Saffron Walden Museum’s first truly co-curated exhibition. Led to community led an exhibition where skills were shared and new audiences were targeted. 12 collectors were recruited each round of the exhibition focuses on six collectors .Funding from Essex County allowed each collector to have a display panel with their photo and a short description of the collection and their reasons for collecting.

The exhibition was developed over a series of workshops between the collectors and the curator on text, display and telling the story. The museum worked with other collectors and found out about their collections and worked in a collaborative way to develop the display. Each collector had a 150 text panel and 50 word labels for their case display. The collectors did their own object installation. It was a useful exhibition for demonstrating the similarities of public collecting and museum collecting. The personal texts enhanced the exhibition, bringing in different voices which brought the displays of objects alive. This was further developed in the film which accompanied the exhibition which was made by a volunteer.

Other benefits include local press coverage, new contacts for local expertise and the funding has bought a new community case for regular use. Most participants were nor previously users of the museum and they now advocate for the museum and have a better understanding of the museum’s role.

After a delicious lunch (catered by the Kings Arms on Market Hill) Gemma Tully (Visitor Services and Learning Officer) gave us an overview of some of her work: Her role is to work with lots of different audiences and it was inspirational to hear what had been going on at the museum despite her very limited budget and the museum’s lack of ‘behind the scenes facilities, eg no catering facilities.

Her programme includes working with pre school groups using a grant from Essex County Council. For £15 a session budget Gemma runs Museum Minis, as a once a month story craft session. Schools are taught the basics of curating exhibitions and then they put on an exhibition either at the museum or at their school.

Every year they have one big event for families often using living history and every summer they offer 3 free sessions to families as well as other paying events eg Museum Murder mystery.

Gemma’s top tip for getting a lot of visitors in at the same time was ‘Turn the lights out’, as their ‘museum in the dark’ events always bring in a big crowd.Adult events include Private Hire, and also a pop- up restaraunt with 100 covers! The museum also offers itself as a venue for non-religious naming ceremonies, which bizarrely use the medieval font as part of their ceremony.

We were then joined by Gordon Cummings of the Fry Art Gallery: He gave us an introductory session about the Fry’s history and foundation, including the current purchases they are able to make through their grant from the HLF’s Collecting Cultures strand.

Two 19th century purpose built museum and gallery buildings in one day! The Fry Public Art Gallery only opened in 1987, but it is in a gallery purpose built in 1856 to house the collection of Francis Gibson, a local Quaker businessman, and the building passed by descent to the Fry family, who lease it to the Fry Art Gallery Society.

It houses an impressive number of paintings, prints, illustrations, wallpapers and decorative designs by artists of the 20th century onwards who have local connections and have made a significant contribution to their field. There is an emphasis on those who settled in Great Bardfield in the mid 20th century including Edward Bawden RA and his friend Eric Ravilious. It also focuses on the work of Tirzah Garwood, Michael Rothenstein RA, and his wife Duffy (now Duffy Ayers), Kenneth Rowntree, George Chapman and others.

The gallery is stunning, being so densely packed with so many of those north west Essex artists who are so familiar in a national context. So many familiar images from reproductions and which have featured in other displays, yet all here together in one room! Many of us came away with postcards, books, posters and of course memories of those images. A refreshing and inspiring end to a day full of variety!